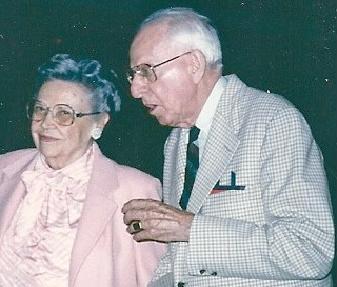 Born on December 8, 1900, in , , Irving F. Stocker came to in the fall of 1925 and spend all but one year of his working life as an educator in . He earned a Bachelor of Education degree from the State College at , in 1924, with majors in Science and Secondary School Administration. In 1937, he earned a Master of Arts degree from in Guidance and Secondary School Administration.

He spend thirteen and half years teaching at . In 1944, he was named assistant principal at (which was renamed in 1964) and held that position until his retirement in 1966. Mr. Stocker was known for creating and maintaining discipline among students attending his high school.

Irving F. Stocker passed away on February 10, 1992. He saw many changes in his life. He served as both a teacher and as an administrator in Kenosha during the Great Depression, World War II, the Korean War, and the Vietnam War.

“The purpose of is to fit young men and women for the art of living in accordance with the basic principles of our democracy.  This means scholastic achievement of course, but it also means the development of spiritual and physical, mental and moral characteristics in the fine degree of balance that makes good citizens and good bodies.  On the eager hands and alert minds of today’s youth will depend, not only the future of our own way of life, but the hopes of freedom-loving peoples throughout the world.  To equip these young men and women to accept that responsibility is ’s ultimate purpose.”