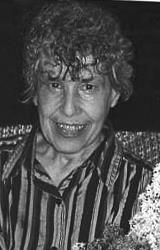 She worked at the Dayton Hotel from 1979-1980 and later, worked as a cashier at the Roosevelt Theater in its last year of operation, 1984. She participated with the Lakeside Players, in "The Man Who Came to Diner", and acted in the Gateway Technical College radio-dramatic program in 1982. She will be fondly remembered for her participation in local community theater, her love of country drives and her love for her beloved Chihuahua, PeeWee.

"Life and Death Are One, even as the river and sea are one In the depth of your hopes and desires lies the silent knowledge of the beyond, And like seeds dreaming beneath the snow, your heart dreams of spring, Trust the dreams, for in them is hidden the gate to eternity" Kahlil Gibran

Celebration of Life to be scheduled at a later date.